In 1996 highly regarded brewing engineer and professor, Dirk Naudts, created De Proef Brouwerij in the village of Lochristi, near the historic city of Gent, Belgium. The ultra-scientific brewery blends modern equipment and technologies with traditional brewing methods. Beers are produced on one of three brewing systems, matched to volume and desired flavor profile. It’s like a Wonka for beer! Michael Jackson once described De Proef as “the ultimate toy for the aspiring home brewer.” 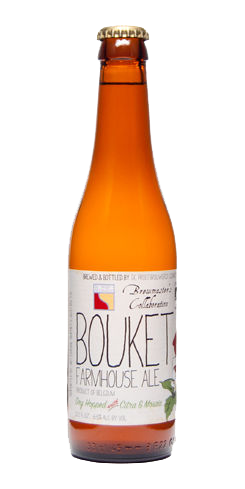 De Proef & Trillium Brewing Collaboration – Created in 2007, the annual De Proef Brewmaster’s Collaboration series has featured some of the most notable brewers and breweries in the United States. It has been consistently noted for both quality and creativity and was a forerunner to the numerous collaborations which now dot the brewing landscape.

For the 10th anniversary collaboration, we have selected the newest and perhaps smallest brewer to ever participate in this series – Jean-Claude Tetreault of Trillium Brewing Company in Boston.

In only its third year of operation, Trillium has taken the brewing world by storm. Boston Magazine named Trillium Boston’s Best Brewery and a remarkable 21 of the Trillium beers rate at the 98th percentile and above on RateBeer. They have just opened their 2nd brewery in the Boston suburb of Canton to quench the thirst and demand from New England beer lovers. It is our great pleasure to combine JC’s talents with that of De Proef’s Dirk Naudts to bring this unique collaboration to beer lovers across the country.

About The Beer
– A farmhouse style ale featuring pronounced ripe notes of pineapple and peaches in the nose balanced by hints of dry hop aroma. A unique blend of wild yeast and bugs creates a subtle and pleasing earthiness to the nose and on the palate. It has considerable finesse and pleasantly thirst quenching.
Malts: Pilsner, malted white wheat, blend of oats, wheat, rye, barley
Hops: Sterling, Galaxy, Mosaic
Yeast: Mixed fermentation of brett and custom microbes

While Saisons are generally known for their light body and subtle spice, Saison Imperiale is a bolder, “mega” interpretation of the style. Light amber in color, funky wild yeast notes and spice in the nose, with a bit more malt character, body, and hop notes as appropriate to the “Imperiale” style. May 2006 selection – Michael Jackson’s Rare Beer Club.

Fermented three times with two different yeasts, including a strain of brettanomyces – the “wild yeast” of lambic brewing. Pale golden color with an enormous rocky white head. Brett and spicy aromatic notes, with a malty-funky-juicy note on the palate. Finishes with Brett and dry hop notes.

From the Flemish translation for “sweet-sour.” This is a unique amber colored ale of multi yeast strain fermentation, with a hint of Belgian Kriek (cherry) juice added. The brewer has combined these elements in a subtle and complex blend where sour notes are balanced by tart fruit, hints of wood, and a velvety finish. Bottle Conditioned.