Sünner was founded in 1830 on the “right” side of the Rhine River in the Deutz neighborhood of Cologne, when all other breweries were on the “left” bank. This is why their glasses say “Kölsch van seiner schönsten Seite” which translates to “Kölsch from the most beautiful Side”.

At the site in Deutz the Sünner family built a brewery and distillery, both are still used today. It is one of the most beautiful brewhouses in Germany and a charming setting from which the Original Kölsch originates.

Sünner is still 100% under family control, they are still on the right side of the river and their beer, if not the neighborhood, is certainly the most beautiful in all of Cologne. 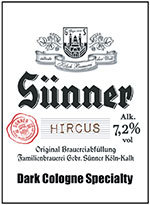 It was Sünner that brewed the first beer in the modern Kölsch style (though it wasn’t called that then) around 1900. Sünner is a ‘Kölsch’ beer, unique to Köln (Cologne) Germany. Like Champagne (Appellation Controlee) it is protected by laws, so that only beers brewed in that region can bear the name. It is an Ale with a stylish character derived from lagering. It is clear and pale straw in appearance. The taste is refreshing, gently fruity, slightly sweet with a crisp, dry finish.

While we cannot call Sünner Kellerbier a “kölsch”, we can categorically call it “delicious!”

This is the unfiltered, fresh-from-the-aging-tank version of Sünner Kölsch. It has a hazy appearance and a more intense flavor than kölsch. The aroma is yeasty, slightly hoppy and bready. On the palate, Sünner Kellerbier is fuller in body than normal kölsch and has a more complex, very dry, character with notes of hay, bread, honey and a nice, clean bitterness. It’s a wonderful complement to Sünner Kölsch and a delightful beer in its own right!