The First of Elgood’s Original Sour Series Now Available in the U.S. Coast-to-Coast 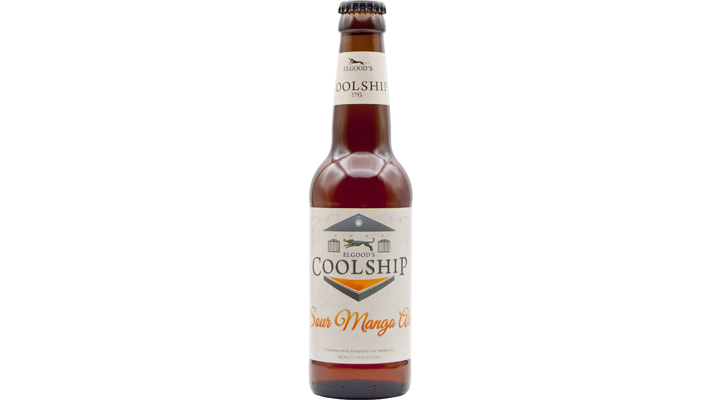 Not just a kettle sour, Elgood’s uses copper coolships from the 1920s to cool their wort overnight. These traditional fermentation vessels are broad and flat with open tops – accelerating the cooling process while also inoculating the wort with a healthy mix of microbes. As the wort cools, it becomes the perfect home for lactobacilli, which are responsible for the bright sourness. Brettanomyces and other wild yeasts add earthy notes and saccharomyces cerevisiae, or brewer’s yeast, finishes the fermentation.

This complex and symbiotic fermentation gives Elgood’s beers a depth and complexity of flavor that is just not possible any other way. It takes between 9 and 12 months for Elgood’s Sour Mango Ale to reach maturity, aging peacefully the whole while in stainless steel tanks to which oak and chestnut chips have been added.

The result is a one-of-a-kind tart yet sweet ale – a combination of barrel-aged, spontaneously-fermented English “Cambic” (Lambic from Cambridgeshire) and fresh mango.

“Because our brewery focuses on traditional English ales, the equipment we use for all of our brewing, but in particular for the sour ale production, is actually well-suited for ‘lambic’ beers,” said head brewer Alan Pateman. “We have a unique pair of copper ’coolships’ which date from around the 1920s, and these are key to the story of the sour beer.”

“The idea of the mango as a sweet addition to offset the sour beer came to us as we were trying a range of ‘tropical fruit’ flavors to add to a German-style wheat beer – a similar approach to what the Belgians have used to make sour beer more marketable, but we didn’t want to use cherry.”

“For malts, we use pale ale and un-malted wheat in the mash tun, sourced from eastern counties of the U.K., where some of the finest malting-grade barley is grown. For the Original Sour Ale we follow the Belgian tradition and use a relatively low addition rate of aged hops in the boil, and we use Styrian Goldings that are low in bitterness and have also been aged to result in high levels of tannins.”

For interview opportunities with brewer Alan Pateman, or for more information about the family-owned brewery’s heritage and handcrafted beer, please contact Lanny Hoff at +1 (612) 245-5433 or by email at lanny.hoff@artisanalimports.com.

About Elgood’s Brewery: Elgood’s Brewery is family-owned and situated in the heart of ‘Fen’ country in Cambridgeshire, England. It was established in 1795, and is one of the first classic Georgian Breweries to be built outside London. Learn more at www.elgoods-brewery.co.uk.