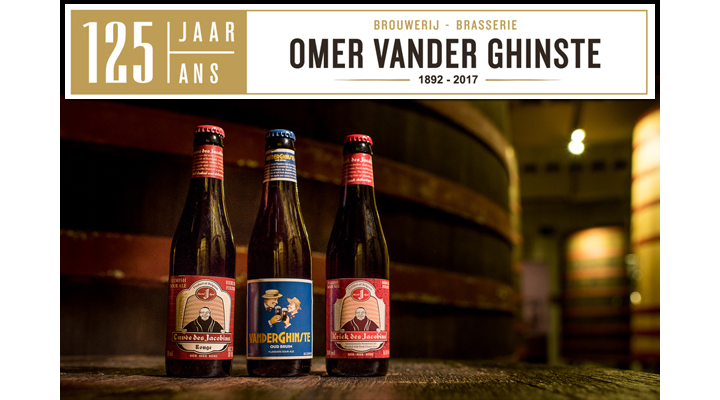 Bellegem, Belgium (March 16, 2017) – Brouwerij Omer Vander Ghinste opened its doors in 1892 when Remi Vander Ghinste purchased a brewhouse for his 23-year-old son Omer. Omer named the brewery after himself and established the brand through stained-glass window marketing at local pubs. He and his wife would name their son Omer, beginning a family tradition of every first-born Vander Ghinste being named Omer. Today’s fourth-generation owner/manager Omer-Jean carries the torch, marrying family tradition with modernity.

“2017 is a special year for the brewery,” says Omer-Jean. “We are celebrating 125 years of beermaking while also looking to the future. We have been able to maintain our brewing heritage by staying true to time-tested brewing methods such as spontaneous fermentation as seen in our popular Cuvée des Jacobins Rouge. However, we will not rest on our laurels.”

Omer-Jean continued by saying, “In 2008, we created OMER., a decidedly modern beer brewed according to an original recipe – top-fermented before undergoing a second fermentation in the bottle. It contains carefully selected ingredients, such as high-quality malted barley from the Loire region of France and three varieties of aromatic hops. It is a full-flavored beer with a fruity aroma and a subtle bitterness, made to drink fresh.”

OMER. Traditional Blond, winner of a World Beer Cup Gold Medal in 2010, is an 8% ABV beer with a striking golden color. Learn how to pour a perfect glass of OMER. here.

Two new limited-edition beers will be released later this year. The first will be the second series of the Cuvée Prestige with a stronger ABV than its predecessor at 7.6%. The second will be a new single-barrel, 100% spontaneously fermented beer.
Since its inception, Brouwerij Omer Vander Ghinste has been a champion of accuracy, reflected both in its brews and its ability to speak to the consumer through its products and marketing strategy.

For interview opportunities with Omer-Jean Vander Ghinste, or for more information about the brewery’s heritage and world-renowned beer, please contact Lanny Hoff at +1 (612) 245-5433 or by email at lanny.hoff@artisanalimports.com.

About Brouwerij Omer Vander Ghinste: Omer Vander Ghinste is located along the French border in Belgium in the small Flemish town of Bellegem. It was established 1892 and is now operated by fourth-generation owner Omer-Jean Vander Ghinste. The brewery produces world-renowned brands such as Cuvée des Jacobins, OMER. Traditional Blond and VanderGhinste Oud Bruin. Learn more at www.omervanderghinste.be.