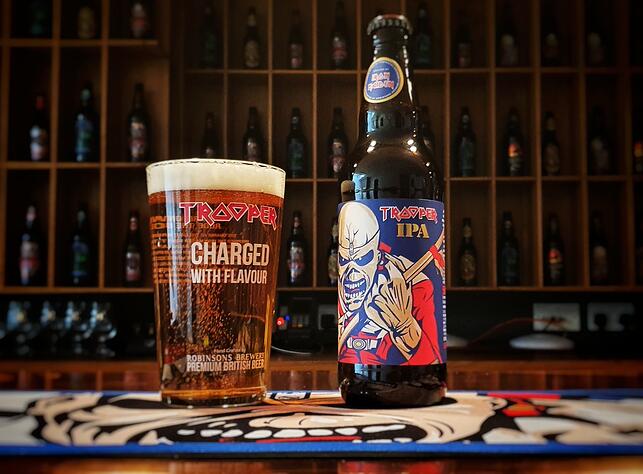 North America (May 6, 2021) – Artisanal Imports is excited to announce that TROOPER IPA, the latest beer from Iron Maiden and Robinsons Brewery of Stockport, England is now available nationwide in the United States.

TROOPER IPA is a 4.3% ABV golden India Pale Ale packed full of hoppy flavors. The beer is a creation of Iron Maiden frontman and beer enthusiast Bruce Dickinson and Robinsons Brewery Head Brewer Martyn Weeks that references the “American IPA revolution” with its choice of hops.

“It’s exciting to have an IPA from Iron Maiden that acknowledges the continual demand for hoppy bitter beers here in the states,” says Bob Leggett, CEO of Artisanal Imports. “We believe TROOPER IPA will be the bridge to the TROOPER brand portfolio for the American IPA lover who has yet to discover Iron Maiden and its world-acclaimed line of craft beers.”

TROOPER IPA aims to challenge the senses and pours a beautiful pale golden color with a clean tight white head and a floral and hoppy aroma. It is refreshing, full-bodied and bittersweet with hints of tropical mango and grapefruit. The hop bitterness is not overpowering and balances out the sweetness nicely. Taste this beer between 50-53˚ F to fully accentuate the flavors. It’s a perfectly sessionable ale designed to be enjoyed year-round.

Join Robinsons Brewery Head Brewer Martyn Weeks here for a short video as he guides you through a tasting of TROOPER IPA. TROOPER IPA is now available for purchase nationwide at your favorite retail stores in 12-pack cases of 500ml bottles as well as 500ml single bottles.

Look for the other Iron Maiden beers on shelves and in kegs nationwide including:

TROOPER Fear of the Dark (English Stout)
A 4.5% ABV English Stout that is full-bodied and rich in dark roasted chocolate flavor.
12/500ml bottles are now available.
Gift tins include a 500ml bottle, pint glass and tin that arrives in September.

TROOPER Sun & Steel (German Pils with Saké)
A 4.8% ABV hybrid beer made with two yeasts; a lager yeast for the initial fermentation followed by a saké yeast for a second fermentation. The result is a delicate, subtle fruit flavor infused into a pilsner-style lager.
6/4/500ml cans and 1/2 BBL kegs are now available.

TROOPER Day of the Dead
This limited series label rebrand for TROOPER arrives in September in 12/500ml bottles.

Interested in selling TROOPER IPA in your retail store, bar or restaurant? Interested in becoming a distribution partner for the Iron Maiden’s TROOPER line of beers? Please contact Crystal Bunger with interest.

For interview opportunities with Robinsons Brewery Head Brewer Martyn Weeks, or for more information about Iron Maiden’s TROOPER line of beers, including media samples of TROOPER IPA or other TROOPER beers, please contact Crystal Bunger at +1 (512) 440-0811 or by email at media@artisanalimports.com.

About Iron Maiden: With over 100 million albums sold worldwide, Iron Maiden is considered one of the most successful heavy metal bands in history, having played over 2,000 live shows internationally over a career spanning more than four decades. Iron Maiden’s famous mascot, “Eddie”, has been a steadfast figurehead over the band’s 16 studio albums, the most recent of which is their first ever double album and topped the chart in over 40 countries. For more information on the band, their tour and their beer, head to www.ironmaiden.com.

About Robinsons Brewery: A proud family of independent brewers, Robinsons is one of the most advanced and sophisticated breweries in the U.K., with a worldwide reputation for real ale. Robinsons applies decades of experience to create exciting new varieties and choices of flavor that encourage drinking excellence.